Both Models fit the data very closely given new orders appear in a nearly linear increase over the selected years. 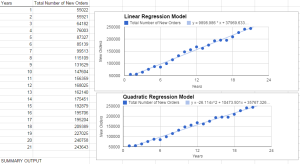 The model has a relatively strong R^2 value indicating its decent strength at predicting values of the model. As the model progresses it appears to break down in accuracy of the data as unions become a socialist thing of the past and membership become sporadic. 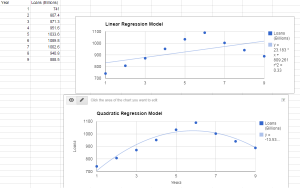 The Linear model is useless for these data given the trend reverses direction during the 6th year. The quadratic form is much more accurate for this purpose as it reflects this change in direction. R^2 is much stronger for the quadratic model.

A fourth order model matches the data slightly better than a third order and much much better than a quadratic equation. Predicting the market is as profitable as taking the rablin express to cripple creek, not at all.